Ideas competition „Memorial of Freedom and Unity“ in the area of the former royal palace in Berlin for the 20th anniversary of the peaceful revolution, March 2009. Exhibition in the crown prince’s palace, May 2009.
The blueprint WIR is composed of two parts which complete each other in their functions: on the one hand the 30 m high, 5 m long and 1,2 m brad monumental stele with the recessed word WIR  at the upper edge, on the other hand a corridor composed of 32 wall plates. 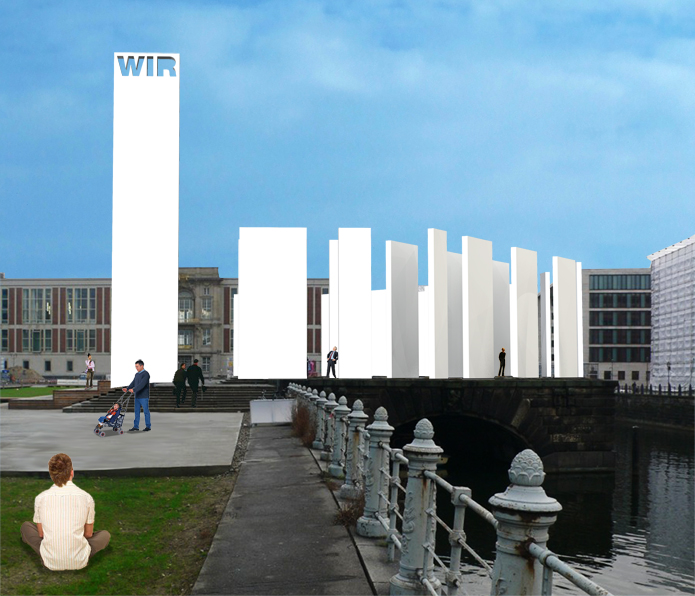 The WIR stele is the centre of the monument. It is situated on the same place where formerly the equestrian statue of King Wilhelm I. was located. The stele is oriented towards to the sight axis of Karl Liebknecht Street in a right angle to the palace area. The corridor takes over the place and proportions of the former colonnades which accompanied the equestrian statue. The 9 m high wall plates of different breadth line up around the stele like persons in a demonstration around the speaker. The language of form is simple, native and clearly visible and constitutes a clear contrast to the surrounding buildings. 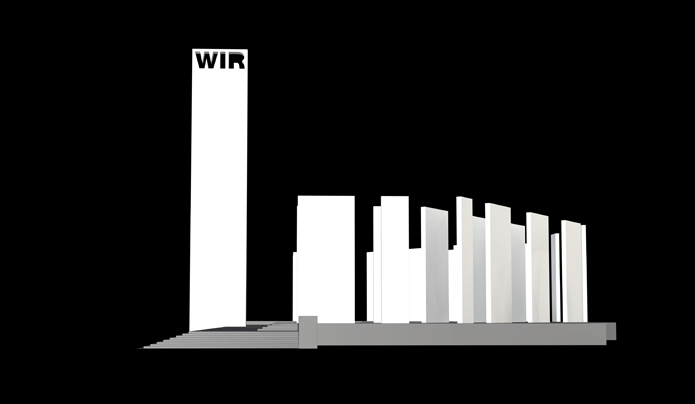 The steles are made of smooth white concrete. The socle is reconstructed as prescribed by the protection of historic buildings and monuments. The large scales leadings towards the socle are extended up to the stele. At the edge of the scales, towards the waterside, a ramp is planned which grants access free of barriers. In the dark the ensemble is illuminated and constitutes a contrast to the dark sky.
The visitor entering the white corridor is led through the site of information. Pictures, texts and multimedia installations make visible history, the peaceful revolution and the efforts for national unity in the last century. 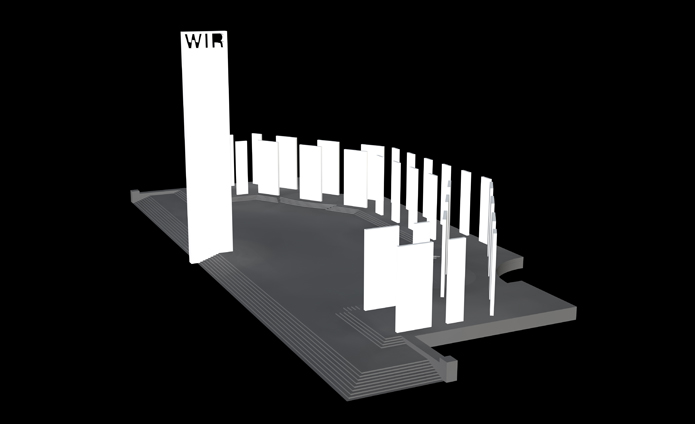 The stele is a visible and clear sign.
WIR is the symbol of solidarity and of the power which results from it. With the call “Wir sind das Volk” (“WE are one people”) every week hundreds of thousands of GRD-citizens expressed themselves all over the country and protested with the words
„WIR sind ein Volk“, „WIR gehören zusammen“, „WIR sind Deutschland“ (“WE are one people”, “WE belong together”, “WE are Germany”)